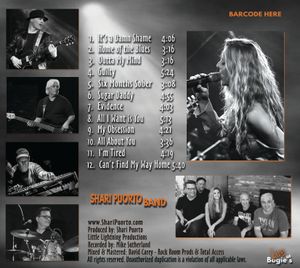 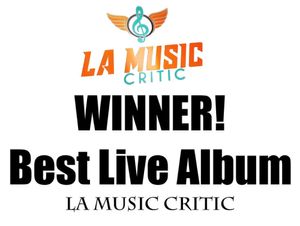 Live at Bogie's
Purchase CD HERE and receive an autographed copy! $15.99 (includes shipping) US ONLY.

What are some saying:
I have previewed literally thousands of CDs during my almost 2 decades at WMHB.  I can tell by the first few verses of a song that I'm going to be spinning that song on my radio show.  But there are times when I keep the CD in the player for every verse of every song on the entire CD because the music is so great and so captivating that I can't stop listening!!  What a great feeling and that is exactly what happened with the SHARI PUORTO BAND's new CD, LIVE AT BOGIE'S!   SHARI's vocals rock and the band just rocks and cooks song after song after song!   Highest rating for LIVE AT BOGIE'S!! - Patrick Turlo DJ, WMHB 89.7FM

Blues Bytes: "The covers include a tasty reading of Randy Newman’s “Guilty”..may be the best interpretation of this song I’ve

Blues Bytes: "The covers include a tasty reading of Randy Newman’s “Guilty”..may be the best interpretation of this song I’ve heard. Candi Staton’s “Evidence” gets a performance that comes mighty close to the original, and Shari's take on Savoy Brown’s fiery rocker “I’m Tired” is a lot of fun, too. Puorto closes the disc with an exquisite version of Steve Winwood’s Blind Faith classic “Can’t Find My Way Home.” Puorto does a marvelous job with vocals on this set and shows an easy rapport while engaging the audience between songs. The band is first-rate in support. If you’re not familiar with Shari Puorto, Live at Bogie’s is a great place to get started. You’ll definitely want to hear more."

Thank you for your support!